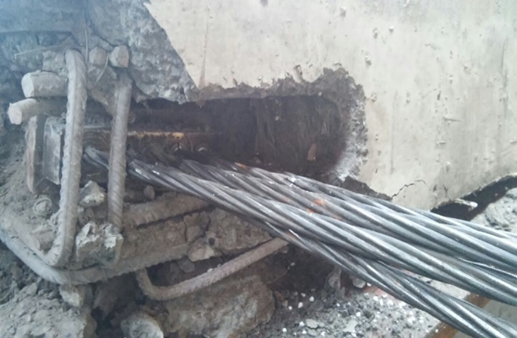 Post-tensioned (PT) slabs are typically flat slabs, band beam, and slabs or ribbed slabs. PT slabs offer the thinnest slab type, as concrete is worked to its strengths, mostly being kept in compression. Longer spans can be achieved due to prestress, which can also be used to counteract deflections.
Post-tensioned slabs use high-strength tensioned steel strands to compress the slabs, keeping most of the concrete in compression. This gives a very efficient structure that minimizes material usages and decreases the economic span range when compared to reinforced concrete.

The term pre-stressing is used to describe the process of introducing internal forces (or stress) into a concrete element during the construction process in order to counteract the external loads applied when the structure is put into use (known as service loads). These internal forces are applied by tensioning high-strength steel (generally known as Tendon), which can be done either before or after the concrete is placed. When the steel is tensioned before concrete placement, the process is called pre-tensioning. When the steel is tensioned after concrete placement, the process is called post-tensioning. Because pre-tensioning requires specially designed casting beds, it is generally used in the precast manufacturing process to make simple shapes that can be trucked to a job site. Post-tensioning is done onsite by installing post-tensioning tendons within the concrete formwork in a manner similar to installing rebar.
The most frequent post-tensioning installation problem is listed below

• Strand slippage due to cement paste in the anchor wedge cavity
• Blowout/bursting of concrete and or Tendons
• Tendons too short to be stressed using normal procedures and Tendon splicing.

In this article, the bursting of concrete is discussed as a case study. It is advised that Jobsite troubleshooting should be done only by qualified and experienced personnel.

The case is from a project of 13 floors with the post-tension slab. The grade of concrete for slabs is M40 and the thickness of the slab is 250 mm. The slab is designed with a camber and has a maximum span of 12 m. As per the Structural designer, the slabs must be stressed after achieving the strength of 28 MPa or 70% of concrete strength.

In one of the structure, we had encountered bursting of concrete of slab and tendons while stressing, on more than one occasion. This situation is more probable where very fast cycle times are planned and even a small deviation from best practices can result in bursting in the highly stressed anchorage region. The photos shown below indicate the nature of the problem.

While it is not very difficult to repair the concrete and carry on with the stressing operations, the situation should be avoided, and the construction process improved to eliminate the root cause.

In order to do that, the concreting and stressing methodology was examined in-depth and the following possible causes were identified:

To eliminate the blowouts in future slabs, the following measures were adopted:
1. Two sets of concrete cubes were sampled in the last 20 to 30 cum of concrete at pouring location on-site in three batches to ascertain the actual strength of in-situ concrete.
2. Special attention was given to compaction of concrete at the anchor locations at the live end while placing of concrete.
3. Before stressing, the side face of the slab was inspected for the formation of cold joints. In case of cold joints, the area was repaired before stressing was allowed to be carried out
4. Stressing sequence was such that the oldest concrete was stresses first (as the pours could stretch for more than 12 hours).
5. Mortar Bunds were provided along the edge of the slab to the extent possible so that curing would cover the edge of the concrete, right till the anchorage.

With these precautions, the instances of the bursting of concrete were completely brought under control and a fast cycle time could be achieved without any interruption.

Interesting to see how the tension can cause strengthening when it comes to concrete. Really had no clue how this worked, but now thanks to your informative article, I have a good idea of how this works. Thanks for sharing, definitely will be reading more often now.

How useful are Quality Ratings for construction projects?

Cost of quality and challenges in construction

Do I really need Quality Audits?

After Chandrayan ……. Concrete on the Moon?

Mr. Shashank Vaidya (Director - GEM Engserv)
An interesting thought on "How would concrete on the moon be different from the concrete on the earth?" with intriguing future ready construction technology transformation.
Read More

Myths about Value Engineering in Construction

A Case for Quality Management System