After Chandrayan ……. Concrete on the Moon? 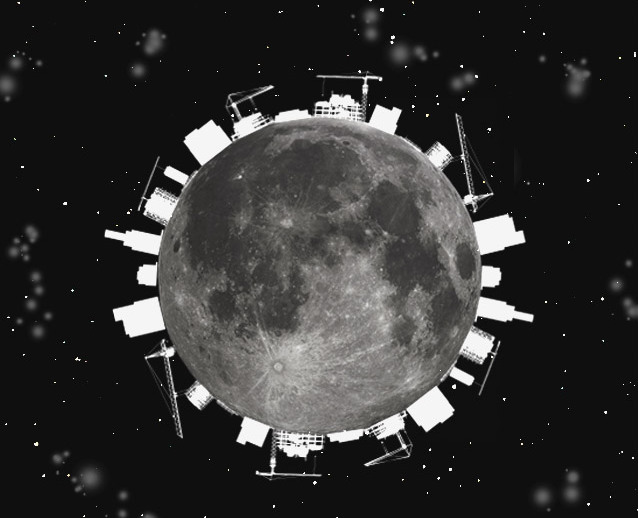 In a previous role, I was once part of an interview panel that had been set up to assess top performers in our company. Amongst a host of other aspects, we were to probe and comment upon the lateral thinking ability of the candidates. I recall that a particularly creative member of the interview panel had framed the following question. “If cricket were to be played on the moon, who would be the most disadvantaged, the batsmen, the bowlers or the fielders?”  While it would take more than a few minutes, if not hours, to weigh all factors and conclude either way, the most creative answer to this question should have been “the umpire”!

It would be equally interesting to ask the question “How would concrete on the moon be different from the concrete on the earth?” With the near audacious success of the Chandrayan mission, this question is far closer to reality than one would have imagined a few years ago. Concrete is second only to water as the most used material on this planet. It would be in the fitness of things if concrete repeats this feat on the moon also!

The difference between concrete on earth and moon may well begin with a difference in the required properties. We all know that the pull of gravity on the moon is one sixth of that on the earth. This means that the dead loads and live loads on the moon will be one-sixth of that on the earth for a structure designed for the same purpose/ function and having similar physical dimensions. Will M10 concrete then be sufficient where M 60 is prescribed on the earth? Quite possible, assuming that there won’t be moonquakes and wind forces on the moon. However, the moon is known to have been subjected to many instances of impact in the past. The impact of foreign bodies could well be the governing force in the design of structures on the moon.

On the durability front as well, things may be far different on the moon. Devoid of any atmosphere, carbon dioxide will no longer pose the threat of carbonation nor chlorides for corrosion of reinforcement. It obviously does not rain on the moon, so drying and wetting would also not be a cause for deterioration. What could matter is the temperature variation which is much more extreme on the moon. The maximum and minimum temperature is in the range of above 100 degrees Celcius and below -100 degrees Celcius respectively. These are beyond boiling and freezing temperatures of water. This very large temperature variation would require considerably more attention than other aspects. We also need to cater to the large expansion and contraction that would result throughout the service life of the structure.

Will we require RCC on the moon or will PCC suffice? Well, if all overturning forces and moments are generated by the eccentricity of vertical loads and not external horizontal forces like wind or moonquake, it is likely that the structures would be far more stable by themselves. However, to make large span beams, slabs, cantilevers and bridge girders etc. RCC will be required. The normal/economic spans on the moon may however be 6 times that on earth. Isn’t it quite an incredible feeling to imagine beams that long and lightweight by themselves to support the loads?

Coming to the production of concrete, what problems can we foresee in such a low gravity scenario? For one, mixing may be less efficient in conventional rotating drum type mixers and we may have to use only paddle-type / rotating blade type mixers. The slump of concrete of the same workability may be one-sixth and the concrete may not flow in the forms as easily in the absence of the strong gravitational pull! The force on formwork will be much smaller and the forms could be much lighter.

But the biggest problem could well be the periods of very low temperatures alternating with very high temperatures on the moon. The sub-zero temperature would mean that the cement as we know would cease to hydrate for a part of the time and may have accelerated hydration during other periods. All ingredients may have to be heated to produce concrete and curing would involve not only water but also careful temperature control to facilitate hydration and strength gain. Perhaps, we will invent cement that hydrates at extremes of temperature.

Well, the objective here is not to write a guideline for concrete making on the moon, but only to provide a topic for those inclined to a flight of fancy. It is indeed a flight of fancy with no practical benefits to the readers who are practicing concrete technologists on earth (as of now). However, once in a while, is it not OK to leave aside the concrete problems on the earth? Who knows, engineers at ISRO may actually be working on a project like this?

Thinking about such imaginary issues could sometimes clear some doubts regarding the scientific subjects that form the basis of engineering and could help you think out-of-the-box. Readers are encouraged to point out factual errors and logical mistakes in this article for sake of better understanding the laws of physics and mechanics.

Another side benefit could be that, the next time you come across some unexpected question in an interview, you may well be better prepared.

Author: Shashank Vaidya - Director
Aggregates both coarse and fine do not receive the attention that they deserve. Let us understand the contribution of coarse aggregate in concrete.
Read More